Law, Detroit, and the Gold Rush

In a comment in response to my recent post about how a law professor can feel un-rich while still making more than $250K/year, one commenter suggested that the legal industry in America is like the Detroit auto industry 30 years ago.  By this I took it to mean that the legal industry has been operating generally free of competition for decades and has grown slack, complacent, over-paid, and used to making their product their way - and in for a great fall over the next couple of decades.

That got me thinking - I can see the parallels in that both the legal industry and the auto industry are not doing well, but there are a lot of differences between the industries, too.  As I thought more about the cost structures, the products and how they are sold through dealerships, and several other factors, the analogy started to work for me less and less.  So I asked myself - what would be a better analogy to the state of the legal industry at this time, especially from the point of view of those thinking about going to law school?  Here's what I came up with: 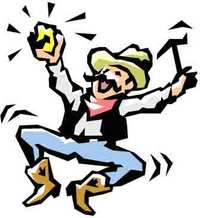 To me the recent flood of people going to law school seems more like a modern-day gold rush.
Today's "miners" are like yesterday's miners in that they are lured by the very infrequent, but widely reported stories of someone striking it rich (when that does not represent the experience of most of the actual miners).   Instead of the newspapers screaming about someone find a huge gold nugget, they instead trumpet a starting salary of $160K.
Today's "miners" are also like yesterday's miners because they don't do their homework and just take off for "the land of opportunity" because "everyone there gets rich."  Unfortunately, when they get there they have to spend a lot of money for mining tools at inflated prices (for today's miners, this represents the cost of law school tuition.)  However, once they buy the tools/degree, they find that all best claims are taken - and nobody is even interested in taking on a junior miner/associate.
Consequently, many of today's "miners" are ending up like the overwhelming majority of yesterday's miners - broke and starving.  However, as we all know, the people that sold the materials to miners did very well for themselves - just like today's law schools are doing very well for themselves by selling law degrees.
Unfortunately, there are two things about this modern-day gold rush that are even worse than the original.  First, law schools are charging more than "cash on the barrel head" like the original suppliers did.  Instead, law schools are putting today's "miner" in debt to the company store for their entire lives.  If the old miners wanted a clean start, they just had to go get another job - no so with today's "miners" because the debt will follow them anywhere they go - and may even be used to reduce their Social Security benefits in old age.
Second, many of today's "miners" are pretty close to minors.  It might not matter to some that you take people who have no experience with the real world and then saddle them with debt for the rest of their lives - debt that is not even dischargable in bankruptcy - but it matters to me.  In our society, there is such a tremendous sense of "for the children" that it amazes me that people are a complacent when their children are fed to the law school mill.
That just don't seem right, pardner.
Posted by Managing Partner at 12:54 PM