In my recent post "Greed and Horse Gambling" I compared 1) how some people who have a gambling problem are unable to reasonably evaluate the odds of winning and lose large sums of money based on the erroneous belief that the odds will somehow be different for them than for everyone else, with 2) how some potential law students make similar unreasonable decisions to go to law school.  I was just answering some comments in the article and I noticed that Google's Adwords advertising apparently matched the words in the article with this disturbing graphic (edited to remove company name): 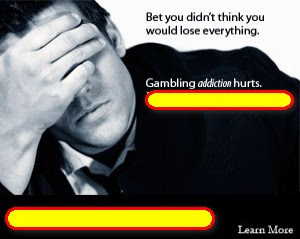 Wow.  It struck home with me because before I read the caption I assumed that the person in the ad was a lawyer - probably based on the suit and tie and that he appears unhappy (has anyone else noticed that if you see an ad with a person in a suit and tie and they are unhappy, it always seems to be a lawyer?)

My second thought was that the graphic could very easily be applied to law school.  The students that are going to law school certainly don't think that they will lose everything by making a bad decision.  "Somehow" that $200K in tuition and expenses will get paid for - even though 6 in 10 students don't get the job that they want - and "somehow" they will still be able to have a great life with the millstone of huge debt hanging around their neck.  Unfortunately, in fact, gambling addiction hurts a lot more when you gamble on going to law school because the student loans are NOT dischargeable in bankruptcy!  If you lost it at the casino, you could discharge it in bankruptcy in most places - not so with student loans.

See that graphic, potential law students?  For the majority of you (60%), that's you.  Actually, because you won't be able to discharge the loans in bankruptcy, you will wish you had it as good as the guy in the picture.  Please, please be very careful when considering whether to go to law school.  It's the worst time in decades to go right now.
Posted by Managing Partner at 3:30 PM